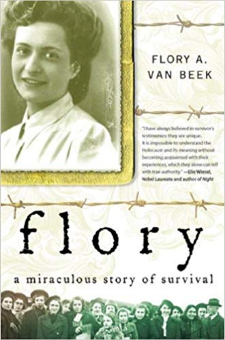 In 1939, as the Nazi occupation grew from threat to reality, the Jewish population throughout Europe faced heart-wrenching decisions—to flee and lose their homes or to go into hiding, hoping against all odds to avoid the fate of being discovered. Holocaust survivor Flory A. Van Beek faced this terrible choice, and in this poignant testament of hope she takes us on her personal journey into one of history's darkest hours.Only a teenage girl when the Nazis invaded her neutral homeland of Holland, Flory watched the only life she had ever known disappear. Tearfully leaving her family, Flory tried to escape on the infamous SS Simon Bolivar passenger ship with Felix, the young Jewish man from Germany who would later become her husband. Their voyage brought not safety but more peril as their ship was blown up by Nazi planted mines, one of the first passenger ships destroyed by the Germans during World War II, sending nearly all of its passengers to a watery end. Miraculously, both Flory and Felix survived.After recovering from their injuries in England, they returned to their homeland, overjoyed to be reunited with their families yet shocked to discover their beloved Holland a much-changed place. As the Nazi grip tightened, they were forced into hiding. Sheltered by compassionate strangers in confined quarters, cut off from the outside world and their relatives, they faced hunger and the stress of daily life shadowed by the ever-present threat of certain death. Yet they also discovered, with the remarkable and brave families who sacrificed their own safety to help keep Flory and Felix alive, a set of friends that remain as close as family to this day.A tribute to family, faith, and the power of good in the face of disparate evil, this gripping account captures the terror of the Holocaust, the courage of those who risked their lives to protect their fellow compatriots, and the faith of those who, against all odds, managed to survive.