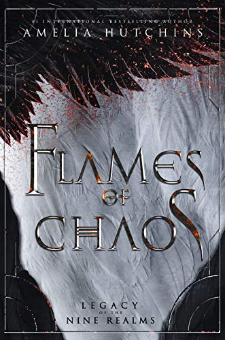 Aria and her sisters return to the Human Realm of Haven Falls to find one of their own that’s gone missing. They soon discover things have changed in the Human Realm and that nothing is what it seems, including Knox, the egotistical, self-centered, frustratingly gorgeous man who declared himself King during their absence.Sparks fly when the two enter a fiery battle of wills as Aria learns she is more than just a witch in the Hecate bloodline; she is much, much more.Will Aria embrace her savage side to find her sister and save her family, or will she burn to ashes from his heated kisses and burning hot embrace?Knox has ulterior motives for being in Haven Falls and never expected the little witch to show up and brazenly challenge his rule.It was supposed to be easy; get in and get out. Move pieces into place and set the stage for the war he’s been planning for over five hundred years. Aria is his sworn enemy but something within her calls to him and he hates himself for craving the fiery kisses that have reignited his cold, dead heart. One taste, and he thought he could get her out of his system. He was wrong.Will Knox let go of the memories of the past, driving his need for revenge that will destroy the pretty little witch he craves, or will he push the boundaries to fight for and claim what is his by right? Either way, war is inevitable. And nothing will stop him from reaching for what is his.Epic Fantasy with heavy love-hate situations with adult situations.