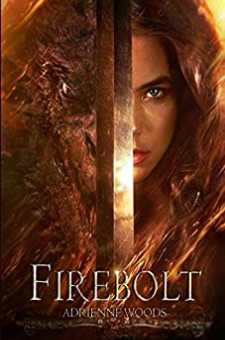 More than 2500 5-star reviews on Goodreads, find out why Firebolt is rated the next best read.This book is the BEST dragon book I've ever read! (After Eragon) THE BEST! I COULDN'T STAND THE AWESOMENESS! Goodreads ReviewerDragons? Yes, please! But “Firebolt”, the first book in a riveting new YA fantasy series, gives us so much more than ‘just’ dragons. - I HEART READING BOOK BLOGLOVE IT! this book was awesome! I so love dragon stories. and this one was no exception.- Amanda MastersDragons. Right. Teenage girls don’t believe in fairy tales, and sixteen-year old Elena Watkins was no different.Until the night a fairy tale killed her father.Now Elena’s in a new world, and a new school. The cutest guy around may be an evil dragon, a Prince wants Elena’s heart, and a long dead sorcerer may be waking up to kill her. Oh. And the only way Elena’s going to graduate is on the back of a dragon of her own.Teenage girls don’t believe in fairy tales. Now it’s time for Elena to believe – in herself.Q. Tell us what the novel/series is about. A. Firebolt is the first novel in the series. It’s about a sixteen-year-old girl, Elena Watkins, who is taken to a world called Paegeia. She learns the hard truth that once you enter you can never leave. The key to Paegeia’s survival comes in the form of a formidable sword that was stolen. The series is about bravery, growing, finding herself and where she belongs, and becoming the person she is meant to be, mixed in with loads of dragons, magic and romance. I personally have a thing for dragons. If the fictional kind existed, I would probably have a colony. The dragons I created for my world shifts into humans, not the other way around, as they are born dragons, or hatched out of an egg. The setting is modern but with an epic fantasy feel. I decided to go this route because all the other dragon stories I love, when done in a fantasy world, usually plays off in the medieval times. I wanted something more modern, so I wrote it. I’ve worked really hard on the story line and have been told many times that it’s a really great series and fans read them over and over. Q. What order should the series been read in? Firebolt Venom (novelette) Thunderlight Frostbite Poison (Novella) Moonbreeze Starlight Venom and Poison are actually chunks of deleted scenes from Thunderlight and Moonbreeze that slow down the novels. I ended up turning them into a novella and a novelette. Q. Why should readers buy the series? A. I spent years crafting it, and turning it into the best it could be. The heroine isn’t very strong in the first novel, she is a normal teenager with fears and doubts, just like every other human her age. It’s filled with adventure, an academy that hovers in the sky, 11 dragon breeds, a kick ass prince who obviously steals Elena’s heart and a bad boy Alpha dragon. And all of that is mixed with magic, spells, gaining abilities around the age of seventeen and taming dragons. Who can ask for more? Q. I don’t have time to read because of little time in my busy day to day schedule, is there a way to listen to this series on audio. A. Glad you asked. Yes, Tantor Media has developed the Dragonian Series into audios. The wonderful, and I mean she is really wonderful as a narrator, Erin Moon, is the voice of Elena. She is bringing the series to a new high with the audios, giving voice not just to Elena but also to all the other characters in the series. Her accents are to die for. She is really brilliant and will entertain you for hours. I’m very, very, proud of my audios. So if you don’t have time to read, be sure to listen instead. Q. Do you have any other series planned that follows the characters of this world? A. Yes, they are called the Beam Series. Moonbeam is actually taking place 10 years (more or less) after Starlight ended. Darkbeam Part I-III is Blake Leaf’s story Starbeam (Feature Release) Firebeam (feature Release)