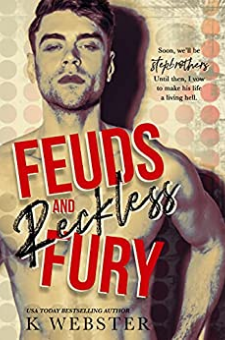 From USA Today bestselling author K Webster comes an angsty and emotional enemies-to-lovers gay romance standalone!The hatred began when my father proposed to another man in a shocking moment that rocked my family to its core….Now I’m on a quest for revenge against my father.That means hitting him where it hurts—the new fiancé and the son he thinks so much of.Alister Sommers.Alis is a bleached blond perfectionist thorn in my side who’s used to everything going his way. Grades, money, track—he dominates it all despite his short, insignificant frame.Was one dad not good enough that Alis had to take mine too?Soon, we’ll be stepbrothers.Until then, I vow to make his life a living hell.Maybe Dad will regret his terrible mistakes.Maybe he won’t.I know I won’t regret wrecking their lives like they did mine.I’ll give up everything, even my girlfriend and football, if it means I get a chance for retribution.It’s reckless and risky, but I don’t have much to lose.The havoc I wreak might ease some of the pain Dad caused my mother.I’m willing to give it a shot.What starts as a family feud will become a war…one I plan on winning no matter the cost.There’s only one small problem.I may have underestimated my opponent.