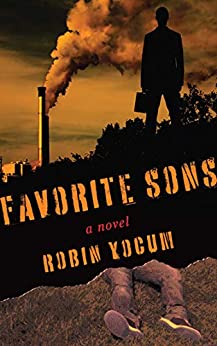 Narrator of Favorite Sons Hutch Van Buren is fifteen years old, playing sports and searching for arrowheads in a small industrial town in Ohio with his three closest friends when an altercation between the comrades and Petey Sanchez, a troubled seventeen- year-old, leads to Petey’s accidental death. Together, Hutch and his friends become ensnared in a web of secrets and moral dilemmas. A local ne’er-do-well goes to jail for the crime while the boys keep their pact of silence. Each boy shoulders the burden of truth in his own way as each attempts to leave the past behind.

Thirty-three years later, in 2004, Van Buren is the prosecuting attorney in Summit County, Ohio, and a candidate for state attorney general when he learns that he and his boyhood friends weren’t the only ones keeping a secret about Petey’s death. A convicted sex offender in need of a favor attempts to blackmail Van Buren in return for his silence. Van Buren must decide between his political career and the duty of the office he has sworn to uphold. With the clock ticking, Van Buren has a week to seek out his boyhood friends and search his soul while he sorts out three decades of deceit he helped create.