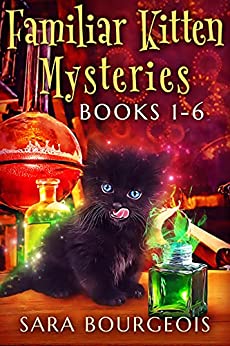 Welcome to Coventry!Black Magic Kitten Kinsley Skeenbauer never thought she would go home. At seventeen, she’d left Coventry and didn’t look back. But after a messy divorce, she packed up her stuff and drove toward the only place that she knew would accept her. Life hadn’t been easy for Kinsley since she left town. Despite wanting a family desperately, she was childless. She had a college degree but had just been fired… again… She’d spent her entire adult life rebelling against what she was, and that meant hiding her true self from the world. Kinsley left Coventry on a mission to be ordinary. But you know what they say about the best-laid plans… Coventry isn’t your typical small town. It’s home to the most powerful family of witches in the world. Two ancient witch families united when her parents married, and she was supposed to be their leader. Nobody ever asked Kinsley if that’s what she wanted, though. Funny how the universe worked because there she was divorced, childless, and jobless… again… rolling into Coventry in her broken-down car with a U-Haul full of everything she owned. The joyous welcome home party was short-lived, because a dead guy turned up, of all places, behind the diner. Of course, the town’s hunky sheriff starts to give Kinsley the side-eye. But, a lot of people wanted the victim dead, and that only complicates the investigation. There’s a murderer on the loose in Coventry, and Kinsley’s got to learn to harness her powers to avoid the killer’s snare. Oh! And, then there’s Meri, the black cat familiar. Someone decides to grant him one wish for his faithful service to his coven, and it doesn’t go as planned either… Welcome back to Coventry. The events in this story take place thirteen years after Kinsley left Coventry. It can be fully enjoyed on its own and is suitable for all ages. You’ll find no swearing, gore, or adult situations, but you will find magic, mystery, and a hint of lighthearted mayhem.

Midnight Magic The Midnight Magic Festival is upon Coventry, and Kinley Skeenbauer is excited to participate for the first time. Since her shop, Summoned Goods & Sundries, is the newest thing in Coventry, she's been invited to provide swag bags and decorations for the festivities. With Meri at her side, Kinsley is ready to pull out all the stops and make this year's Midnight Magic Festival the best her hometown has ever seen. There's just one problem… A new witch, Astra Argent, has moved to Coventry and opened a competing shop across the street from Kinsley's store. When Kinsley comes to work one morning only to find her windows smashed, decorations destroyed, swag bags missing, and Astra's wallet in the glass, she's furious. A confrontation the whole town witnesses goes down in front of Astra's shop, The Summoning Scroll. Thirteen hours later, Astra is found dead on Kinsley's front porch. Her body is sitting in a rocking chair with a cocktail in her hand. The macabre staged scene sends a shockwave through Coventry. Someone wanted Astra dead, and they wanted Kinsley to go down for the crime. Can Kinsley and her friends solve the murder, or will she end up caught in a killer's wicked snare? Come along as Kinsley and friends solve the crime one spell at a time.

Sympathetic Magic When someone close to Kinsley is cursed, she turns to a Voodoo Priestess to help her break the awful spell. This seems to be the right solution… until the Priestess turns up dead.