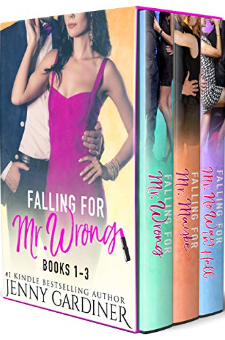 Hit the beach with one of your favorites from Big O Romeo…after the palatial elegance of the Royal Romeo series, it’s time to relax in the warm, summertime vibes of the North Carolina shores, where sun, fun, and romance take center stage, with the first three books of the series bundled for the first time...Falling for Mr. WrongIf lusting after him is wrong, she doesn’t want to be right…Harper Landry sometimes feels like she’s turned into a professional dater. Which might not be such a bad job if it didn’t involve having to spend so much time with a succession of truly undesirable men who were obviously still single for good reason. So she’s elated when she ends up on a blind date with the charming and handsome Danny Greevy, a man who seems too good to be true. But Harper’s starting to think that too good to be true might be downright perfect for her. Particularly when the man who launched her man-drought shows up unexpectedly to throw a wrench in her life yet again.Noah Gunderson is back in town after traveling the world for the past several years. Forced to return home after promising his mother on her deathbed to save the beloved inn that she’d nearly run into the ground, he’s planning to get far away from Verity Beach just as soon as he’s got the inn back in the black. And he’s determined not to let the distraction of Harper Landry, the one that got away, keep him here a moment longer.Falling for Mr. MaybeIf it swells, ride it…Georgie Childress moved to Verity Beach to lick her wounds after her controlling fiancé pulled a runner mere weeks before the wedding. Jobless and desperate to flee his turf, she sought solace in the quietude of the ocean, happily escaping into her own thoughts while surrounded by diving dolphins and cacophonous seagulls. Only when she accidentally runs over some random—and super sexy—surfer dude’s surfboard does she start to wonder if she needs to bring her head out of the clouds and start paying attention to life again.Spencer Willoughby long ago fled his rigid upbringing, shunning the familial expectations of an Ivy League education and Wall Street career in favor of the sun, sand and surf along North Carolina’s Outer Banks. Give him a surfboard and he’s a happy man. That is until some nutty lady with a penchant for fender-benders backs into his beloved hand-crafted wooden surfboard, snapping it in half. It’s enough to make a man crazy—crazier still because the kooky blond is making his blood run hot.Just when he finally gets the woman out of his head, Spencer is unwittingly paired off with her at a wedding as a favor to a friend, forcing him to make nice with his board-murdering nemesis who he might just want to ride off into the sunset.Falling for Mr. No Way in HellTaking the plunge…Lacy Caldwell’s mermaid gig at a cheesy roadside beach bar provided much-needed income while she pursues her graduate degree. That is until the beloved owner dies and her greedy nephew announces he’s cashing out by closing the bar and selling the property to a developer who’s going to replace the kitschy charm of the Mermaid’s Purse with ocean-view condos.Cameron Sanders can’t believe his good luck. Struggling financially, he’s thrilled to find out some random, ancient aunt he hardly knew died and left him an inheritance that’ll help take the money monkey off his back. He’s ready to go to the mat in battle when some annoying mermaid from the bar tries to throw a wrench in his plans. But things get complicated when he realizes that she’s a woman he’s started to have feelings for.