Eye of the Moonrat 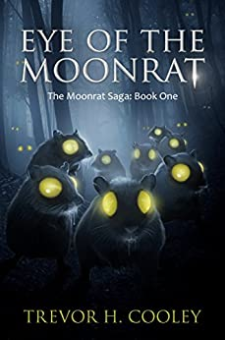 Part One of the Moonrat Saga and the first book of the acclaimed Bowl of Souls Series, an action-filled fantasy series set in a world of magic, mystery, and monsters! Justan knew what he wanted. He was to join the Dremaldrian Battle Academy and become one of the greatest fighters in the Known Lands, but nothing is going his way. He is forced to train with a strange warrior woman and after an ancient elemental marks his chest with a frost-covered scar, magic seems to be determining his fate. Meanwhile, the evil forces of the Moonrat Mother have joined with Ewzad Vriil, a wizard of immense power who is transforming wild creatures into an army of monsters.Join Justan and his companions on an epic journey that will pit them against the Dark Prophet’s evil followers. Ogres and dragons, warriors and wizards are destined to clash, their fates guided by The Bowl of Souls. The Bowl of Souls series. THE MOONRAT SAGA 1. Eye of the Moonrat2. Messenger of the Dark Prophet3. Hunt of the Bandham1.5. Hilt's Pride4. War of Stardeon5. Mother of the MoonratTHE JHARRO GROVE SAGA1. Tarah Woodblade2. Protector of the Grove3. Ogre Apprentice4. The Troll King5. Priestess of War6. Behemoth (2017)THE DARK PROPHET SAGA1. Sir Edge (Upcoming)