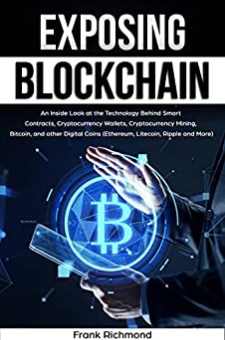 Cryptocurrencies may have crashed into the news and stayed there, but the technology that made them possible is still mysterious to most of us. In this book, you’ll not only find out about the blockchain and how it has revolutionized data storage, but how to it could change almost every industry on the planet.Most people think of the blockchain as a cog in the wheel of Bitcoin, but it’s a whole lot more than that. Thanks to a new way of thinking about the financial system we rely on, this revolutionary technology brings possibilities not just for the global financial markets, but for every industry, government sector and human endeavor that involves collecting data.Find out exactly what the blockchain is – and how it worksIn this book, you’ll discover how a financial disaster in America started a chain reaction that ultimately created the blockchain and its first offspring, the cryptocurrencies. Find out why it was such an important discovery and why it became so popular, so fast – and why it will likely be a big part of the future, too.Learn how the blockchain could solve numerous problems in our current worldNot many people know what the blockchain is and what it can be used for. That’s understandable – it’s a brand new way of thinking. In this book, you’ll discover:·         How the blockchain made it possible to throw bank managers and regulators to the curb·         The myths and mysteries of the blockchain – and the truth behind them·         What makes the blockchain such a revolutionary technologyStart your journey into the digital future right hereDiscover how the blockchain is already being utilized in science, government operations, business ledgers and so much more – and how its possibilities are likely to grow as it becomes more widely understood.Understand how the blockchain worksIn this book, you’ll learn the basics of the blockchain – how it operates and the human role in its success. You’ll find out about:·         The miners who keep the system running·         The Proof of Work protocol that ensures it is secure – and the alternatives·         How a block is created and where it goesDiscover the technology of the futureThis book will open up the world of the blockchain to you, from its earliest days to the future it has the potential to bring. You’ll discover:·         Where it all began, in the early days of the internet·         How cryptocurrencies emerged and why they caused such a huge reaction·         What the blockchain is capable of outside the financial systemStart your journey alongside the technology of the future. Pick up your copy right now by hitting the BUY NOW button at the top of the page!