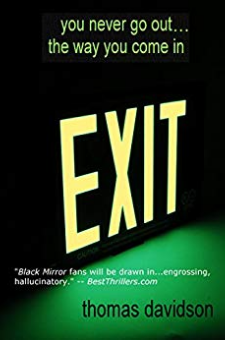 "Engrossing, hallucinatory tale of a screenwriter who stumbles into another dimension," hailed BestThrillers.com. If you're a fan of Black Mirror or the Twilight Zone, welcome aboard. EXIT, a near-future thriller, is loosely based on my short story, "Exit," winner of San Francisco's 2013 Litquake Booktrack Halloween Short Story Competition.Parallel worlds are best left to theoretical physicists. Not Rayne Moore and her boyfriend, Tim Crowe, two struggling screenwriters. Their passion for movies will lead to an unusual door, where the exit is an entrance. And what's coming next...is "coming soon" to our world.Tim, home from Massachusetts General Hospital and recovering from retinal surgery, sneaks out one night and sees a movie (with one eye). The film paints a paranoid near-future, as impersonal and invasive as a grainy security-camera image. The trailer for coming attractions isn't a tease--it's a warning. But the pièce de résistance is the theater itself. Tim experiences movie magic unlike anything he's ever seen. When he goes missing, Rayne follows his faint trail to the theater, seeing an eerie clip of coming attractions. On the screen, she spots a lone figure on a crowded street. Tim? When she walks down the aisle and opens the rear exit, her journey begins.Because at this theater, you never go out...the way you come in. Now turn off your cell phone, dim the lights.It's showtime.(The first half of EXIT was published in 2014 as FLOATERS, a 35,000-word novella. I wrote a sequel, but couldn't release it as a standalone without the reader knowing the back-story. So I combined both parts in February 2015, and retitled it EXIT, a full-length novel at 73,000 words.)