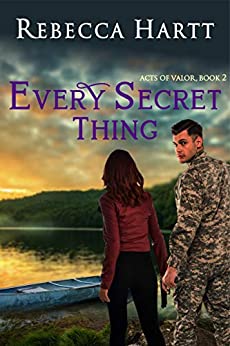 Navy SEAL Lt. Lucas Strong isn't about to let his platoon leader, Lt. Mills, go to prison for a crime he didn’t commit. It’s their retiring commander who should face court-martial for amassing stolen weapons. With the evidence proving the commander's guilt destroyed, and every witness dead, Lucas must find his only remaining hope, Charlotte Patterson, a gutsy NCIS intern with a photographic memory--missing but believed alive.

Freed by a real-life hero, Charlotte Patterson is happy to join the fight, certain the corrupt commander murdered her supervisor. But her detailed memory is fading fast, and Lucas’s belief that God has everything under control could get them killed; Charlotte knows first-hand God doesn't oversee everything.

Now with mercenaries hot on their heels, taking on a man protected by rank becomes deadly, pushing Lucas and Charlotte ever closer, turning their friendship into something much more and leaving Charlotte with just one prayer; that Lucas is right…God really is the master planner.

Publisher's Note: Fans of Susan May Warren, Lynnette Eason, Dee Henderson as well as Marliss Melton, Irene Hannon and Colleen Coble, will enjoy this engrossing and heart-stirring series of redemption and rebirth.