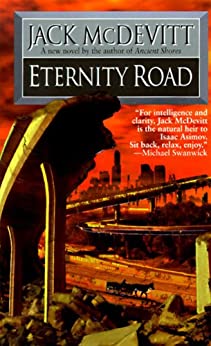 The Roadmakers left only ruins behind -- but what magnificent ruins! Their concrete highways still cross the continent. Their cups, combs and jewelry are found in every Illyrian home. They left behind a legend,too -- a hidden sanctuary called Haven, where even now the secrets of their civilization might still be found.Chaka's brother was one of those who sought to find Haven and never returned. But now Chaka has inherited a rare Roadmaker artifact -- a book called A Connecticut Yankee in King Arthur's Court -- which has inspired her to follow in his footsteps. Gathering an unlikely band of companions around her, Chaka embarks upon a journey where she will encounter bloodthirsty rirver pirates, electronic ghosts who mourn their lost civilization and machines that skim over the ground and air. Ultimately, the group will learn the truth about their own mysterious past. Read more