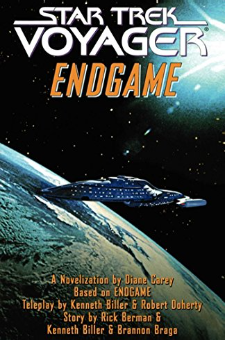 For seven tumultuous years, the U.S.S. Voyager™ has explored the Delta Quadrant, encountering strange alien civilizations and bizarre space-time anomalies as it steadfastly made its way back toward the safety of Federation space. Captain Kathryn Janeway and her heroic crew have faced all manner of harrowing danger and hostile life-forms -- including the Kazons, the Borg, and the Q -- while never losing sight of their ultimate goal: home. Now, at last, Voyager's epic trek may be nearing its end... After so many perilous and astounding adventures, will Captain Janeway finally bring her wayward starship back to the Alpha Quadrant? And what will become of her diverse yet tightly knit crew? Will Chakotay, B'Elanna Torres, and the other former Maquis freedom fighters face long-delayed justice for their crimes against the Federation? And is there any place in Starfleet for the uniquely independent Borg known as Seven of Nine? As the ultimate destiny of Voyager is revealed, all that is certain is that nothing will ever be the same!