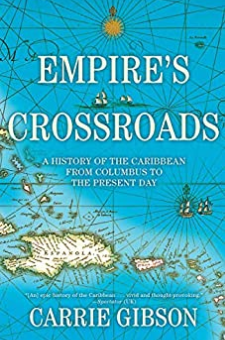 A “wide-ranging, vivid” narrative history of one of the most coveted and complex regions of the world: the Caribbean (The Observer).   Ever since Christopher Columbus stepped off the Santa Maria and announced that he had arrived in the Orient, the Caribbean has been a stage for projected fantasies and competition between world powers. In Empire’s Crossroads, British American historian Carrie Gibson offers a panoramic view of the region from the northern rim of South America up to Cuba and its rich, important history.   After that fateful landing in 1492, the British, French, Spanish, Portuguese, Dutch, Danish, and even the Swedes, Scots, and Germans sought their fortunes in the islands for the next two centuries. These fraught years gave way to a booming age of sugar, horrendous slavery, and extravagant wealth, as well as the Haitian Revolution and the long struggles for independence that ushered in the modern era.   Gibson tells not only of imperial expansion—European and American—but also of life as it is lived in the islands, from before Columbus through the tumultuous twentieth century. Told “in fluid, colorful prose peppered with telling anecdotes,” Empire’s Crossroads provides an essential account of five centuries of history (Foreign Affairs).   “Judicious, readable and extremely well-informed . . . Too many people know the Caribbean only as a tourist destination; [Gibson] takes us, instead, into its fascinating, complex and often tragic past. No vacation there will ever feel quite the same again.” —Adam Hochschild, author of To End All Wars and King Leopold’s Ghost