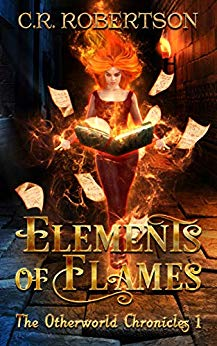 ELEMENTS OF FLAMESBehavioural profiler Morgan Skelly possesses a secret – she has a dream lover who keeps her safe from the terrifying visions in her dreams.Those dreams collide with reality when she meets him at a crime scene in Norway at winter solstice. He is from a magical shadow world that overlaps with the human physical plane, a place where magical beings evolved from the missing link.Drake Obsidian has the looks and body of an ancient god, the heart of a dragon, and the soul of a hero. His strength and magnetism make him irresistible, a force of nature from a magical realm who kidnaps Morgan to save her. His truth blows her make-believe world out of the water when he reveals her heritage with every embrace. What’s a scientist to do when fate designs the perfect mate and he keeps insisting on saving her from a dark mage hell bent on opening the seven gates into the realms of the underworld?Powers are revealed, alliances made, sparks fly, lightning strikes, and worlds collide. Morgan and Drake’s passion holds them together while the Otherworld tries to tear them apart. ***WARNING*** Includes a kick-ass heroine and a panty melting hero who is determined to keep his fated mate safe. Some scenes may melt your ereader, so proceed with caution and a fire extinguisher. Elements of Flames is the first in the Otherworld Chronicles and although the foundation of the series, it can be read as a stand-alone paranormal romance.