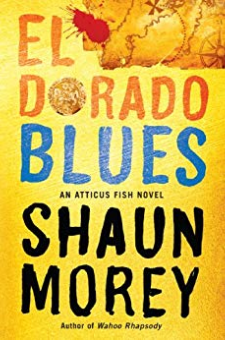 In the badlands of southern Baja, retired expatriate billionaire Atticus Fish finds himself sabotaging illegal commercial longliners from his one-man submarine, and schooling boneheaded tourists in civility. But when archaeologist Duncan Rigby gets kidnapped while on the trail of the legendary Jesuit Treasure, intrepid PI Toozie McGill enlists Atticus to fire up his seaplane and fly off in pursuit. Finding the archaeologist is one thing; recovering the stolen jewels is something else altogether. Now that word of the Treasure is out, will Atticus and his sideckick, mescal bootlegger Skegs, stand a chance against the deadly wave of treasure hunters who wash up on Baja’s shores? A delightfully offbeat mystery adventure brimming with colorful characters and local atmosphere, El Dorado Blues will charm readers in the best-selling tradition of Carl Hiaasen, Elmore Leonard, and Jimmy Buffett.