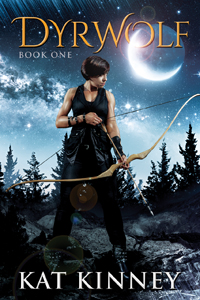 Lea Wylder has spent so long training to kill dyrwolves that now one is stalking her in her sleep. In the harsh, unforgiving forests of the north, shape-shifting dyrwolves have enslaved the sole human city for hundreds of miles, driving survivors up into the mountains. When Lea tracks a shifter and finds him caught in a trap, she’s convinced he’s the white wolf from her dreams. Not that it matters. He’s one of them. And they’re at war.

But as Lea pulls back the bowstring, Henrik shifts to human and begs her not to shoot. By name. But how could he possibly know her? She was rescued from the occupied city shortly after being born. And the wolves never cross the river over to their side. Well, until this one.

Injured and unable to walk, Henrik needs Lea’s help to get back home. When Lea sees the scars circling his wrists, she realizes there may be more at play behind the city gates than any of them realize. If Henrik could be turned against the pack, she could get information that could change the course of the war.

But first she has to figure out why his wolf keeps showing up in her dreams. Oh, and get him to like her. And then there’s the tiny problem of returning him to the wolves… without getting caught.