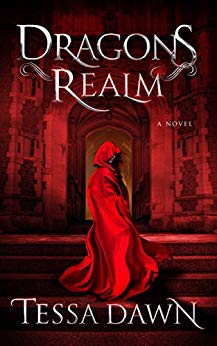 From the bestselling author of the Blood Curse Series, comes a new legend of danger, dark-fantasy, and vampiric dragons...Mina Louvet is a fighter, a human with a powerful will to survive in a world dominated by warlocks, soul-eaters, and shifters. Identified by the king’s witch as one of the rare, invaluable females in Dragons Realm who can give birth to a dragon’s son, she was stolen from her parents as a child and taken to the Keep to be reared in the ways of the Ahavi. As one of the few, the elect ~ the Sklavos Ahavi ~ Mina is expected to feed her master’s fire, reanimate his blood, and above all else, give him strong dragon offspring: children who will one day rise to power. But Mina, to her great misfortune, is far too intelligent for her own good: She has a stubborn sense of justice, and she is wholly incapable of blind submission.Dante Dragona is as cunning as he is lethal, as methodical as he is dangerous, and as terrifying as he is powerful. As the eldest of three dragon princes, he is destined to succeed his merciless father to the throne of Castle Dragon. But first he must do his duty to the Realm by governing one of its harsh, unforgiving districts and claiming a Sklavos Ahavi. Hardened by the sadistic abuse he endured as a child and shaped by the tragic suicide of his twin, the prince lives only to fulfill his obligations to the monarchy: to maintain law and order in a bestial land, to contain its magical inhabitants, and to keep the kingdom safe from its mortal enemies, the Lycanian shifters across the sea. Like all primordial dragons, he rules with an iron fist, dominates with absolute power, and punishes with fire. Those who oppose him die a swift and brutal death ~ subject, enemy, or slave ~ the Realm has no tolerance for weakness. When the iron resolve of a dragon prince clashes with the stubborn will of a slave, bonds will be broken, alliances will be tested, and a kingdom will be set ablaze. DRAGONS REALM by Tessa Dawn