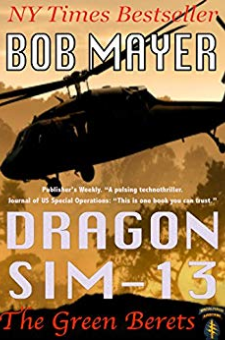 Kirkus Reviews: “Fascinating, imaginative and nerve-wracking. Mayer’s tough, businesslike soldiers again include a tough, businesslike female.” Dragon SIM-13 is an elaborate computerized command post exercise to test the readiness of the U.S. Special Operations Command (USSOCOM). The scenario calls for a U.S. Army Special Forces strike against a strategic target in China. But when thousands of students are massacred in Tiananmen Square during democracy protests, the rules change. Meng, the computer genius behind the SIM program, sees a way to avenge a hatred that had been festering for over 20 years, and tip the scales of freedom. With the push of a button on his master computer, simulation becomes a reality: the Dragon mission is actually launched.Dave Riley and his A-Team parachute into China to do what they've trained for. The only problem? No one knows they're in China. And we're not at war. What do they do now?Library Journal. “A daring rescue mission produces a climax with enough suspense and action to satisfy the most jaded of thriller fans. The author of Eyes of the Hammer delivers another rousing tale.” Journal of US Special Operations: “This is one book you can trust.”From the author: "When alerted, we never knew if it was for real or an exercise. We were prepared for real. If we got our 'Go' codeword while en route, the mission went."