Dotty and the Calendar House Key 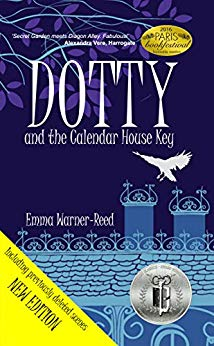 *GET THE EBOOK FREE WHEN YOU PURCHASE THE PAPERBACK*Dotty Parsons knows the noises in the chimneys aren’t jackdaws nesting as the old cook says. After all, it’s December and who ever heard of a bird that whistles? But it is only when the feisty young Welsh girl finds her dead mother’s locket hidden up the playroom chimney that she really begins to suspect there’s more to the Calendar House than meets the eye. What Dotty doesn’t know is that the locket is the key to a long lost magic…and keeping it is going to be a whole lot more trouble than she had bargained for. Award-winning children’s fantasy fiction from #1 bestselling children's author, Emma Warner-Reed. “Secret Garden meets Diagon Alley. Fabulous!” A. Vere, Harrogate.Buy DOTTY AND THE CALENDAR HOUSE KEY today and join Dotty as she is strives to unravel the mysteries of the Calendar House: a place filled with secrets, danger and a just a little bit of sweeps’ magic!DOTTY AND THE CALENDAR HOUSE KEY is the introductory book in the multi-award winning DOTTY Series. Since the release of DOTTY and the Calendar House Key, in 2015, The DOTTY Series has received significant acclaim. To date, accolades include both Gold and Silver awards from Literary Classics, together with their official seal of approval for all three books, honorable mentions at the Los Angeles, New York, Amsterdam and Paris Book Festival Awards, and three coveted five star Reader's Favorites reviews (so it's quite good :o) ).Look out for the fourth series book, DOTTY and the Mermaid’s Purse, due out this year!Here’s what people have to say about the series:"Author Emma Warner-Reed has penned a magnificent children's book with suspense that builds … highly recommended for home and school libraries and has earned the Literary Classics Seal of Approval."Literary Classics Book Reviews, Amazon"Dotty and the Calendar House Key has truly fired my daughter's imagination for the first time since Harry Potter. Beautifully written and exciting. The Secret Garden meets Diagon Alley. Fabulous!"Alexandra Vere, Harrogate"My son has just read the first [book] and thinks it's brilliant - high praise since he has very decided opinions about what he reads."P. Uglow, Harrogate"I really liked the [first] book. It was a bit scary when Dotty found herself in Uncle Winchester's private study. But most of the books I read are a bit scary so that was okay. I would read the other books in the series. Go Team Dotty!"Betty, age 7, Amazon"Enchanting, innocent and lovely with just the right amount of modern technology...a great read for a grown up 7 year old! She loved it... When is the next one coming out?"A. Little, Amazon