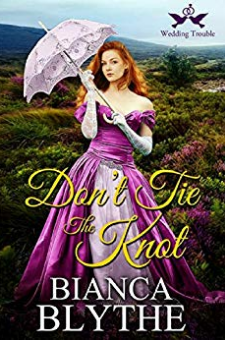 What's the worst that can happen at a wedding?A troublesome wedding invitation...When Hamish Montgomery learns his brother is getting married, he vows to stop the wedding. After all, his brother is a duke and is intended for someone else.A determined bridesmaid...Georgiana Butterworth is startled when a handsome Scotsman breaks into her bedroom and brandishes money. Evidently, he's mistaken her for her newly engaged sister and is trying to bribe her into not marrying his brother. Georgiana knows one thing: she won't permit this man to ruin her sister's chance for everlasting happiness.A wedding that mustn't be stopped...Hamish may be determined to stop the wedding, but Georgiana is intent to make certain the wedding happens, no matter what she has to do to distract him.