Don’t Make a Black Woman Take Off Her Earrings 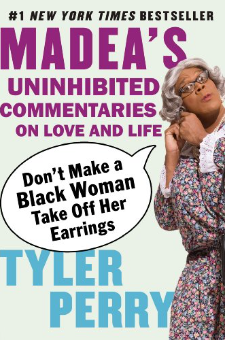 View our feature on Tyler Perry's Don't Make a Black Woman Take Off Her Earrings.In 2005, Tyler Perry took Hollywood by storm. The movie he wrote, produced, and starred in, Diary of a Mad Black Woman, opened number one at the box office and went on to gross more than $50 million. In its first week on sale, the DVD sold 2.4 million copies. At the same time, Perry was starring nightly across the country in a soldout stage show he'd also written, produced, and scored-Madea Goes to Jail-even as another one of his productions, Meet the Browns, was touring nationally. Every week in 2005, 35,000 people saw a Tyler Perry production. His second feature film, Madea's Family Reunion, opens in theaters in February 2006. Now, this triple-threat actor/playwright/director, has written his first book, and it features his most beloved, most irreverent creation: sixty-eight-year-old grandmother Madea Simmons. Madea is at the center of all of Tyler Perry's work, and she's always unfailingly outspoken, dead-on, and hilarious. But in Don't Make a Black Woman Take Off Her Earrings, Madea shares more than she ever has before- about herself, and about what she thinks of everyone around her. The topics inimitably covered by Madea (a term of endearment for "Mother Dear") include love and marriage, child-rearing, etiquette and neighborliness, beauty tips, health tips, financial tips, the Bible and the church, and, of course, gun care. She's brazen, feisty, and never at a loss for words, but at the heart of everything she says- and at the heart of all of Perry's work-is a resounding message of faith and forgiveness. Shockingly hilarious, surprisingly moving, and as rousing and inspiring as a great gospel show, Madea's words of wisdom, memories, and straight-up in-your-face advice will be cherished by Perry's numerous fans- and it all comes just in time for Mother's Day. Tyler Perry is about to take the publishing world by storm.