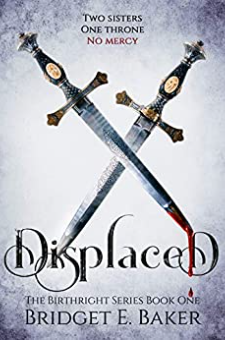 For fans of Victoria Aveyard's Red Queen, Sarah J. Maas' A Court of Thorns and Roses, and Tahereh Mafi's Shatter Me, Bridget E. Baker begins a saga of shocking truths, deadly intrigue, violent battle, and sisterly betrayal.My mom should have killed me the day I was born.Being a twin complicates the Evian line of succession, but Chancery Alamecha is fine letting Judica inherit the throne. After all, she’s the stronger sister—the merciless fighter, the ruthless politician, and the groomed heir. But something unexpected happens when Chancery tries on her mother’s staridium ring, forcing her into a role that she never wanted: the prophesied queen who will prevent the destruction of Earth.Now I have to kill my sister.Judica, enraged by this turn of events, vows to do anything to reclaim her rightful place as empress. Including challenging Chancery to a battle to the death. While Chancery is away training, she gets a taste of the human world, where she can do whatever she wants without family obligations. Now torn between a life she was born into and one that makes her happy, she must confront her treacherous sister—or cause the end of the world.Displaced presents a unique fantasy world that exists within the layers of modern day earth. Humans have no idea that evians, super humans with perfect DNA that hasn't yet broken down by repeated replications, secretly rule the world. Displaced is X-Men meets Game of Thrones with a compelling romantic subplot that develops over the course of the series. What are people saying about Displaced? Kirkus: The notoriously stingy Kirkus called Displaced, "a fast moving, engaging tale in what promises to be an epic fantasy romance series." Check out their full review here: https://www.kirkusreviews.com/book-reviews/bridget-e-baker/battle-song/Amazon Reviewers: "This book drew me in from the first page. Bridget is a fantastic writer, and the story is intense and beautifully written right out the gate. The authenticity of the characters, coupled with the well thought out and complete character storylines made me feel as if I was in the thick of the story with Chancery and Judica. I couldn’t put it down. I read this book in my spare time over the course of 48 hours. It was absolutely irresistible.I quickly purchased the rest of the books in The Birthright Series, and am anxiously awaiting the sixth installment. After finishing this series, I actually read through all of Bridget’s work, and each and every time, I was blown away by the care and attention to detail that she put into the story. I am in awe of the way that she can manage the entire universe so beautifully.I haven’t been this excited waiting for a new book to be released since I was a kid waiting for Harry Potter, or Twilight to come out."?????"It’s been a long time since I’ve gotten addicted to reading a book, but Bridget is a very compelling author!" ?????"She’s phenomenal at laying hints, and she leaves no thread unfinished. What you get is a complete, clean story, everything answered beautifully. Her timing and pacing is incredible as well!" ?????"If you love romance, if you don’t mind starting a book and never wanting to put it down, and you want a stong female character who is written by a woman with insight into what that really looks like, this is it. Read it. Enjoy it." ?????