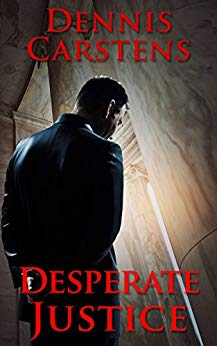 WHEN GOOD MEN DO NOTHING, IT’S UP TO ONE RESOURCEFUL WOMAN TO STOP EVIL FROM TRIUMPHING…In the follow-up to his first action-packed legal thriller, The Key to Justice, bestselling author Dennis Carstens stirs up a vipers’ nest of corruption that snakes its way from the back room of a Minneapolis restaurant through every law enforcement agency up to the director of Homeland Security.After winning the case of a lifetime, Minneapolis criminal defense lawyer Marc Kadella welcomes the infusion of energy his career is receiving. Another lawyer asks him to represent the co-defendant in a murder trial resulting from a petty crime that spiraled out of control—the somewhat “accidental” murder of the nephew of Vivian Corwin, grande dame of the influential Corwin family. Disarmingly charming and still downright sexy at sixty-eight, there’s more to Vivian than meets the eye. You just gotta love a society doyenne who can toss off, “… if I wasn’t a lady, right about now I would say: f--- you.”Marc has no illusions about why he’s being brought into the case, or what will happen. What he doesn’t know is that he’s gotten on the wrong side of a crooked judge; he just knows the guy hates him and will do everything he can to make life miserable for Marc and his client.So imagine Marc’s astonishment when the judge finds himself on the wrong side of the bar, and will accept no lawyer but Marc to defend him against a murder charge! Marc very reluctantly accepts the case and enlists Maddy Rivers, a strikingly beautiful female private investigator who is totally taking names and breaking noses, to help him build his case.And it cracks wide open when it overlaps with Vivian Corwin’s. It turns out the two cases are connected to a local crime king who’s getting away with murder and every other kind of mayhem, but what Marc, Maddy, and Vivian can’t figure out is how he’s doing it.Always thoroughly-prepared and courtly, Marc meticulously builds his case and patiently presses it without heavy-handed courtroom antics or antagonism, even as this compelling legal mystery erupts with courtroom twists that turn into corkscrews.Fans of John Grisham, Richard North Patterson, and of course the most beloved lawyer sleuth of all time, Erle Stanley Gardner’s Perry Mason, will gobble up this one and go back for the rest of the series