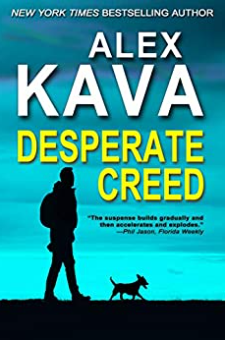 A TRAILBLAZER IN THE K-9 MYSTERY GENRE, Kava creates a “dynamic between Ryder and his canines that reveals a world rarely shared in fiction and perhaps nowhere presented more effectively than in this series.” —Phil Jason, Florida WeeklyAward-winning author, Alex Kava pulls readers into the middle of the storm and has them gasping for air even as they turn the next page."—A STORM IS COMING—In Alabama: A deadly outbreak of tornadoes sends K9 handlers, Ryder Creed and Jason Seaver with their scent dogs, Grace and Scout to search for survivors. As storms intensify and Ryder and Jason race against time to save victims, they end up racing to save themselves.—NOT EVERYONE’S STORM IS THE SAME—In Chicago: Francine “Frankie” Russo is irritated when her young co-worker calls at 5:00 am for a video-chat and catches her in only a towel. She’s so annoyed with Tyler Gates that she’s barely paying attention when two men confront him on the street. In a matter of seconds, Frankie witnesses Tyler’s murder. Then the killers pick up the phone. And suddenly, they know what Frankie looks like, who she is, where she works and lives. She knows absolutely nothing about them. But one thing’s for certain—they’re coming for her next.—WHEN THE STORM HITS—Frankie calls the only people she knows can help: her childhood friend, Hannah Washington and Hannah’s business partner, Ryder Creed. Hannah tells her to “come on home,” and she arranges a meeting for Frankie to meet with FBI agent Maggie O’Dell.Meanwhile in the Florida Panhandle: Creed’s sister, Brodie is dealing with her own storm. She’s realizing that after sixteen years of captivity, surviving was only the first step.With the killers hot on her trail, Frankie races to meet Maggie. But she has no idea that she’s driving straight into the grasp of another killer—a monster storm system. She and Maggie will need Ryder and Jason’s help, but no one is safe from the devastation. And by the time the sky clears, none of them will ever be the same.WHO WILL BE STRONG ENOUGH TO SURVIVE?In Desperate Creed Alex Kava, once again, delivers her signature trademark combining “well-developed characters” (Publishers Weekly) with “a highly original plot” (Suspense Magazine) then packing it with “twists, turns and suspense galore” (Modern Dog). “Did I mention the dogs? They and their human partners are simply the heart and soul of everything.” (Florida Weekly)