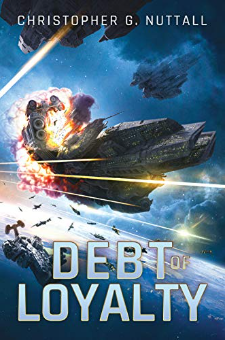 An uncivil war in space sends a planet spinning out of control in the next thrilling Kat Falcone novel by bestselling author Christopher G. Nuttall.The Commonwealth has fractured, its interstellar order breaking down into civil war. On one side is Hadrian, the outlaw king of Tyre, driven from his homeworld and forced into a fragile alliance with the colony worlds; on the other sits a parliament determined to restrain him at all costs. The time for talk is over. The matter can be settled only by war.Loyal to the king, Admiral Kat Falcone leads her fleets into battle, joined by allies with motives of their own. But her friend and former comrade Commodore William McElney has chosen to join the Houses of Parliament. They now find themselves on opposing sides of a civil war, trapped into waging a series of battles that neither wants to fight but that they dare not lose. And as shadows and secrets come to light, they may find themselves watching helplessly as the war tears the universe they fought for apart.