Death in the High Lonesome 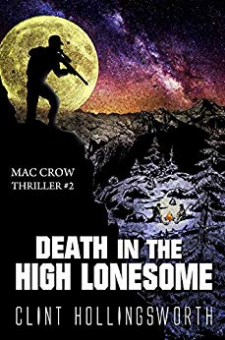 WILDERNESS ACTION THRILLER. Worst 1st day on the job ever!It's common for the first day on the job to go badly, but not this badly. Tracker Mac Crow quickly goes from hunter to hunted. Mackenzie Crow is hired to trail a fugitive from the law. Mac might be new to bounty hunting and weaponry, but he is right at home in the northern woods. This is just the sort of job he needs to make a name for himself. That name might be on his gravestone. Skillfully pursuing a murderer deep into the wilderness, Mac assumes this manhunt will be a slam dunk. After all, law officers and fellow bounty hunter Rosa are at his side. Homo sapiens are full of surprises, however, and the young tracker finds himself on the wrong end of the hunt. Mac and Rosa must escape from the deep mountains with minimal gear during a blizzard. To make things worse, they are being tracked by a killer who always seems to be three steps ahead of them.If Mac's skills of survival and tracking fail them, their bodies won't be found until spring time. FAST-PACED ACTION AND INFUSION OF WILDERNESS SURVIVAL WITH THE THRILLER GENRE. If Bear Grylls worked for a bounty hunter agency . . ."GREAT MODERN WESTERN": #2 in the Mac Crow thriller series. "The Sage Wind Blows Cold" (Mac Crow #1) won 1st Place Chanticleer 2016 Clue Awards Thriller/Suspense and was a Silver Medal finalist 2017 Readers' Favorite Awards.