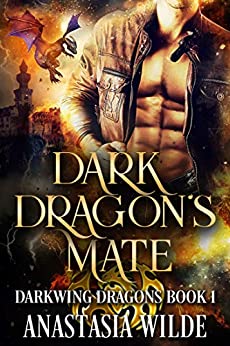 Trish Waverly of the Silverlake pack is hiding a dark secret. Her wolf has gone rogue, overcome with a murderous rage that blanks out Trish’s consciousness when she Changes. If anyone finds out, she'll be imprisoned by the Shifter Council—or even put down.

Her only hope is the Darkwing Dragon—Emon, the exiled prince of a lost Draken clan. His mental powers might be the one way to reach her wolf and heal her broken mind. But Emon is wild, dangerous and half-crazy, haunted by his dark past and suffering from an untreatable wound that’s a slow, painful death sentence.

Emon has retreated to his own world—until it's invaded by an intriguing wolf he can't stay away from. He sees Trish as a shining light in his darkness, but his dragon recognizes—and wants—the out-of-control creature inside her. The Nightmare Wolf.

Prophecy says the Darkwing Dragon will be broken by the Nightmare Wolf—but it doesn’t say what happens next. Can two last-chance shifters put each other’s broken pieces back together, or will the prophecy end in total destruction?