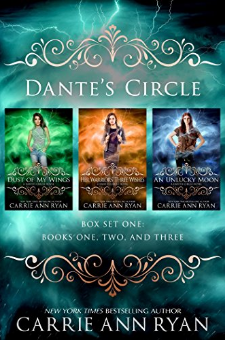 Humans aren’t as alone as they choose to believe. Every human possesses a trait of supernatural that lays dormant within their genetic make-up. Centuries of diluting and breeding have allowed humans to think they are alone and untouched by magic. But what happens when something changes? The first three books of the bestselling Dante’s Circle series are now in one place at a special low price. Do you dare enter the world of the realms?Dust of My Wings – Book 1When chemist Lily Banner finds a vial of angel dust, angelic warrior Shade Griffin will have to do all in his power to protect the ancient secrets of the paranormals. Only when he finds Lily, his world shifts and his allegiance changes, forcing the ones who want Lily put down to take action. The war between the realms is on the edge of a blade and only Shade and Lily can stop it.Her Warriors’ Three Wishes – Book 2Jamie Bennett has known Ambrose Griffin was hers from the moment she knew things that went bump in the night were real. Ambrose has held himself back because he can’t afford to lose anything else. But when Jamie is kidnapped and sent to the hell realm, the warrior angel will not only risk a war to find her, he’ll find his heart—in Jamie and Bailin. When Bailin, a demon from hell, meets the two people who could fill his heart and his soul, he’ll need to fight for something he hasn’t felt in over a century—hope.An Unlucky Moon – Book 3Hunter, the wolf from hell’s games, is finally ready to mate with Becca. If only Becca were ready to forgive him. Between the Pack’s council and strangers who could take everything away from them, Becca and Hunter have more to fight and everything to fight for. Hunter’s dark past takes over their courtship, and just when he thinks all his lost, he’ll find that Becca’s more than he—or she—ever thought.