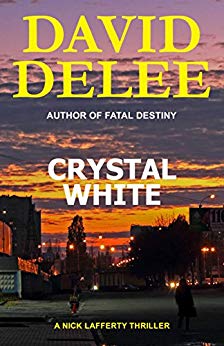 WITH NOTHING LEFT TO LIVE FOR, WILL EVEN DEATH SATISFY HIS NEED FOR REVENGE? AND IF SO, WHOSE?

In California, DEA agent Nick Lafferty led the investigation to eradicate a new and deadly form of synthetic crack cocaine called Crystal White. An investigation that took from him everything he cherished,and left Lafferty a broken man. A man with nothing to live for.

Now, the street poison Crystal White again floods the streets, this time in the northern suburbs of New York City.

Aided by his ex-partner, Delmar Harley, an alcoholic cop on the edge and dogged by a beautiful assistant district attorney who believes the DEA agent's gone rogue, Nick Lafferty relentlessly embarks on a dark and vengeful journey of revenge, mounting a full-on assault against the Crystal White drug cartel. Nick Lafferty will stop at nothing to make them pay...with their lives--or his.

"Crystal White is a dark portrayal of the evil that men--and women--can do." - SUSPENSE MAGAZINE

"It's a perfect fit in the crime detective novel world." - READERS VIEWS

The Nick Lafferty Series (in chronological order): * Crystal White * Out Of The Game *Too Far (Crossover with Grace deHaviland Bounty Hunter)