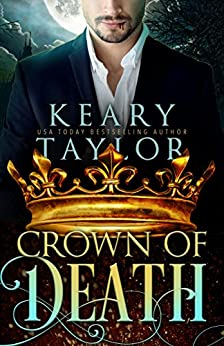 “I am very, VERY picky and my vampire books. Let me tell y'all, from page one, I was gone, hooked, addicted, entranced. I could not put the book down!” ????? – Kindle Customer, Amazon Review

“Whoa! A must read for any vampire obsessed bookworm! This had everything I crave!”????? – Angela, Amazon Review

Where do you draw the line between immortal love and obsession?

Years of bad luck have made Logan Pierce a little bitter, but it all goes from bad to worse the night she witnesses two immortal beings rip a man’s head off with their bare hands.

Her life is wrecked overnight by a single man—Cyrus, who seems to think she’s someone important in his bloody world. But they won’t know the truth until she’s dead, and he’s very anxious to help her get there.

But Logan isn’t going down without a fight. She makes him a deal. She will die, but first he must spend a month getting to know her, a month to change his mind. What she doesn’t expect is a month filled with displays of incredible wealth, spontaneous trips across the country, and unbelievable acts of immortal power. And as Logan spends her last days with Cyrus, she stops seeing the monster and begins to see a lonely, broken man she can’t walk away from. If she isn’t careful, it won’t just be her life she loses at the end of the month, but her heart as well...

Crown of Death is a totally new take on vampire paranormal romance with a brave and snarky heroine, a mysterious and dangerous hero, and truth bombs that will drop your jaw to the floor. Perfect for fans of Bella Forrest, I.T. Lucas, Stephanie Meyer, Eva Chase, Jaymin Eve, and K.F. Breene. Crown of Death is an entry point in to the Blood Descendants Universe, a 12 book, completed series.