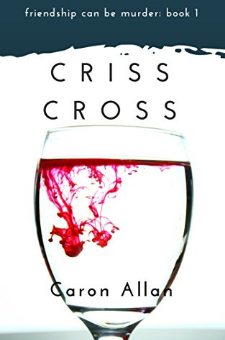 Friendship can be murder! Review: “…the heroine is completely without morals…You really should not like her, but you find yourself wishing her every success in her increasingly bizarre schemes and personal entanglements”Spoilt society girl Cressida Barker-Powell wants to murder her interfering mother-in-law. She plans the perfect murder but when she arrives at the scene, she finds the old woman already dead. Soon it becomes clear that her Hitchcock-Movie-loving best pal, Monica, has carried out the deed for her! Taking the murder-switch idea from their favourite Hitchcock movie, Cressida decides the only real way to show her gratitude is by killing off Monica’s philandering husband and his bimbo girlfriend. Monica should appreciate the idea of swapping murders. That’s what she wants, right?Wrong! Cressida quickly discovers this was not what her friend had in mind, and a devastated Monica is now hell-bent on revenge. Which means their friendship is definitely over. Isn’t it? Buy Criss Cross by Caron Allan now for a dark, humorous tale of murder, revenge and choosing the right outfit for a dastardly deed!A ‘taster’ for you:I was actually going quite fast by the time I hit him. He, with the usual arrogance of the pedestrian these days, had assumed I would simply stop when I got to him, and he just stepped into the road and began to cross without actually bothering to check if it was safe. As I reached him, he was still ambling across the road and clearly wasn’t about to hurry himself. I think he may have even seen me, as he glanced around at the very last nanosecond with suddenly frightened awareness, and there was something–some little look on his face–no, not even on his face, it was just the strangest suggestion of a shade in his eyes, the little lines between his brows contracting. It was a look that said, ‘I always knew she hated me,’ followed by a sudden realisation of what was about to happen and a strong impression that he suddenly thought, ‘oh crap!’But then he bumped up in the air and over the top of the car. I was doing quite a speed and of course, it’s downhill and on a slight bend at that point–not at all a good place to cross really—and I saw him in my mirror, almost in slow-motion, as his head whacked down on the boot and then he hit the tarmac behind me with a strange flomping sound I could hear even though the window was up and Michael Bublé was blaring out of the speakers.Categories: Murder mystery books for Kindle Murder mystery romanceMurder on the mindMurder most unladylikeCozy murder mystery KindleKindle cozy murder mystery romanceRomantic suspense