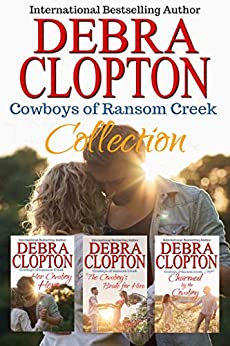 Three heartwarming, clean and wholesome cowboy romances in the 7 book series readers are loving. Fall in love with the rugged and irresistible Presley brothers as the small town of Ransom Creek buzzes with rumors, a little suspense…and a lot of speculation that Cooper Presley might be the first of those handsome Presley men to fall in love. But first in book 1 the brothers help their neighbor find love, book 2 their cousinand finally in book 3 it's Cooper's turn to find his happily-ever-after. Next up-his brothers!

HER COWBOY HERO, Book 1
Rodeo bronc supplier Lori Calhoun has struggled to live up to expectations after her father’s sudden death. When a trailer load of her star broncs disappears, the Knight Agency steps in to investigate.

Foreman of the Calhoun Ranch, Trip Jensen has watched Lori struggle to keep up with the demands of the ranch and the rodeo stock. He’s always admired her and loved her—but he’s kept that to himself. She was the boss’s daughter and is now the boss…off-limits for a cowboy like him. When more stock begins to disappear from the ranch, they must work together to solve the mystery. Unable to know who on the ranch to trust Trip enlist the Presley brothers from the neighboring ranch to back him up.

Lori has always admired Trip, but he made it clear years ago that he wasn't interested. Can love blossom between them before time runs out?

THE COWBOY’S BRIDE FOR HIRE, Book 2

Jilted twice, Bella Reese has no plans to find out if three’s the magic number. She’s done with men. But she’s good at making other couples homes homey and opened her business, Bride for Hire. So far, she’s been amazingly busy with corporate events, with no “homey” entering the equation. Until now…

Jilted by his ex, rancher Carson Andrews will never make the marriage mistake again. But now his daughter is turning five and he wants to make her fifth birthday special by redecorate the ranch house for a growing little girl.

When his cousin Cooper Presley shows him the ad from a Fort Worth newspaper, it’s everything he’s looking for—even the plainly stated absolutely no romance involved. Carson makes the call.

It sounds like the perfect plan—until he meets Bella.

COOPER: CHARMED BY THE COWBOY, Book 3

Romance, cowboys, rodeo, ranching and wild mustangs…the Presley men, aka the cowboys of Ransom Creek, will win your heart and have you longing for Texas.

After making a major dating mistake, Cooper Presley has sworn off women. But then he meets his new neighbor and she's making his new “no dating policy” hard to abide by. She's special and he knows it, but what's he going to do about it?

Beth Lee is happy to settle into her new property with her baby goats and her dreams of a small productive farm. Hiding from her ex-boyfriend, she isn't looking for romance.

When her past catches up to her, Cooper Presley comes to her rescue. Now, despite all the rumors and the jealous ex’s, Beth is at risk of falling in love with the sexy cowboy.

Don’t miss the next 4 books in the series!