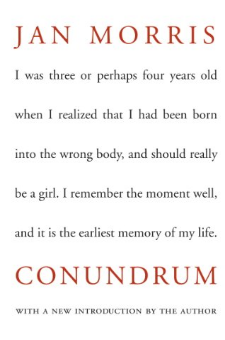 A pioneering work on gender transition, this poetic memoir by a trans woman is “the best first-hand account ever written by a traveler across the boundaries of sex” (

The great travel writer Jan Morris was born James Morris. James Morris distinguished himself in the British military, became a successful and physically daring reporter, climbed mountains, crossed deserts, and established a reputation as a historian of the British empire. He was happily married, with several children. To all appearances, he was not only a man, but a man’s man.Except that appearances, as James Morris had known from early childhood, can be deeply misleading. James Morris had known all his conscious life that at heart he was a woman.

, one of the earliest books to discuss transsexuality with honesty and without prurience, tells the story of James Morris’ hidden life and how he decided to bring it into the open, as he resolved first on a hormone treatment and, second, on risky experimental surgery that would turn him into the woman that he truly was.