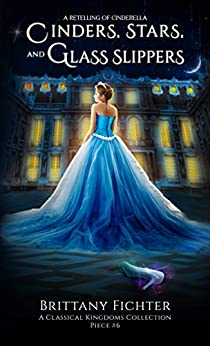 Series Note: Cinders, Stars, and Glass Slippers is book #6 in the Classical Kingdoms Collection, but it can be read as a stand-alone fairy tale novel.What if the prince didn't throw the ball to meet his true love? What if he was trying to save her life instead?Since the murder of her gifted mother, Elaina has been sheltered on her father’s ship. But when Elaina’s secret is compromised, she must return to land and live under the king’s protection...much to her objection.Ashland's crown prince, Nicholas, has never been without. He is, however, facing a possible civil war and a deadly foe who preys on his gifted citizens. So when he meets Elaina, Nicholas delights in insisting that she share her military expertise gained on her father’s ship. He gets more than he bargains for, though, when he finds that he might have fallen for the one girl who refuses to fall for his charms.Just as Elaina and Nicholas begin to realize they might need each other after all, a dark turn of events finds Elaina exiled and forced into servitude, a civil war declared, and the murderer bloodthirstier than ever. Can Nicholas and Elaina defeat the dark forces that have poisoned their kingdom…and find their own happy ending as well?Cinders, Stars, and Glass Slippers is sixth in the Classical Kingdoms Collection, a series of fairy tale retellings for those who still believe in sacrifice, true love, and the magic of happily ever afters.