Children of the Deterrent 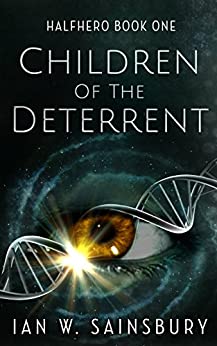 ★★★★★"Unputdownable, totally unputdownable."★★★★★
What if a super human turned out not to be so super...or even human?
Britain's superhero, The Deterrent, was unveiled to the world in 1979, and disappeared two years later. The truth about his origins has never been revealed. The rumours about his children—those that survived—and their mysterious abilities have never been confirmed.
Until now.
Armed with a diary that reveals everything about The Deterrent’s early years, Daniel Harbin—discovering powers of his own—finds himself dragged into the same secretive government department his famous father worked for.
Can a halfhero be a better superhero than his father, or is Daniel making a terrible mistake?
When the wrong people know what you’re capable of, no matter how powerful you are, you're still in danger…
★★★★★"Shockingly good."★★★★★
★★★★★"Blown away by this book."★★★★★
★★★★★"Ian W Sainsbury is fast becoming one of my favourite reads."★★★★★
★★★★★"If you love science fiction and a story that happens 'outside the box' - then you'll love this."★★★★★
★★★★★"Mixing the awe of sci-fi/fantasy/superheroes into the lives of normal people... then topping it off with a fantastic plot."★★★★★