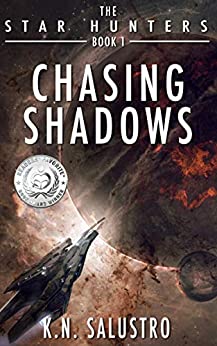 Star Federation soldiers live by these words as they work to uphold peace across the galaxy. Founded at the start of the Andromedan War, the Star Federation annihilated its enemies and has gone unchallenged since then. Sometimes, powerful forces surface and demand more attention, be they drug lords, pirate crews, or bounty hunters worthy of Alpha Classification, but the Star Federation stands firm.

Following the assassination of one of his subordinates, Fleet Commander Lance Ashburn goes on the hunt for the Alpha Class bounty hunter known as the Shadow. One of the best officers the Star Federation has ever seen, Commander Ashburn comes closer than anyone to eliminating the Shadow, but upon meeting her, he learns that a much larger and deadlier enemy roams the stars, one that could destroy the Star Federation.

Caught between the Star Feds and her own dark past, bounty hunter Lissa a.k.a. the Shadow is pulled into a battle with no clean escape. With enemies on all sides, she must choose her allies very carefully. Her decisions could save the galaxy or plunge it into war, and this time, the price of enduring peace may be too high.