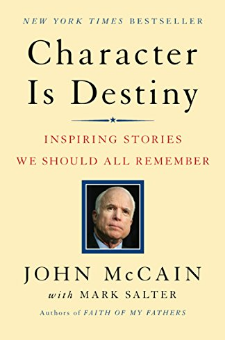 NEW YORK TIMES BESTSELLER • Senator John McCain tells the stories of celebrated historical figures and lesser-known heroes whose values exemplify the best of the human spirit.He illustrates these qualities with moving stories of triumph against the odds, hope in adversity, and sacrifices for a cause greater than self-interest. Among the heroes of exemplary character we meet are   • Pat Tillman, whose patriotism obliged him to leave the riches and celebrity of the NFL for a soldier’s life in defense of his country • Winston Churchill, who, in a renowned eighteen-word remark, counseled schoolboys to “never give up” • the Catholic priest in Auschwitz who offered to take a condemned man’s place • a nun, formerly a comfortable Beverly Hills housewife, who works with prisoners in Mexico’s worst jails • George Washington, whose wisdom and hard-earned self-control helped him survive the chaos of war   Character Is Destiny is McCain’s moving and eloquent tribute to men and women who have lived truthfully, and whose stories will stir the hearts of young and old alike and help prepare us for the hard work of choosing our own destinies.   Praise for Character Is Destiny   “An eclectic collection of heroes . . . [John McCain] will be remembered in a volume like this some day.”—The Washington Post Book World “Uplifting . . . inspiring . . . The lessons of these people’s lives are as relevant to adults as to children.”—Minneapolis Star Tribune “McCain can surprise you, and Character Is Destiny surprises in the diversity of its cast.”—Houston Chronicle“McCain has made a declaration of values that liberals can embrace as readily as conservatives.”—Publishers Weekly (starred review)