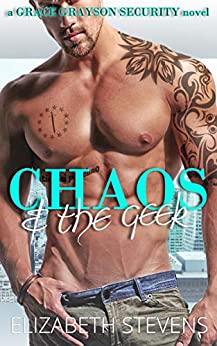 Amber
How do you politely refuse when the only guy to star in any of your dirty fantasies has just offered to put you up for the foreseeable future and your brother’s just accepted like you were in fact still thirteen and couldn’t make decisions for yourself? You don’t. And, you end up with a roommate who wears a very good elegant mask over the rough and tumble, bad boy core I remember far too well.

So, there’s not only the issue that he’s my older brother’s best friend, but also a sex-god this virgin can barely talk to. But that certainly never stopped me from drooling over him and it wouldn’t stop me now. He’s so far out of my league, I wouldn’t even clean in his league.

Except, there might just be a smouldering heat in Kit’s eyes that suggests he’s not quite as out of my league as I thought. Just maybe, this geek is about to get a whole lot of chaos.

Kit
When I find out about my best mate’s little sister’s situation, the offer is out of my mouth before I can stop it; Hawk’s like a brother to me even if Amber’s never looked twice at me. I could never tell if she was scared of me or hated me. But the deal is done. She’s going to bring her bedraggled self upstairs to my penthouse and live with me for as long as she needs.

I see the pain she hides away, I see the lack of confidence despite how smart she is, how good. If there’s something I’ve learned, it’s that confidence makes all the difference. So, it becomes my mission to help Amber find her confidence. But I find more than confidence in her and suddenly I’m seeing my best mate’s little sister completely differently.

I’ve never known what to say to her. She’s always been good and studious and sweet. She’s always been so far out of my league I wouldn’t even carry bags in that league. Her face is a mask that tells me nothing in between the sparse words that come out of her mouth.

Except, there might be something in the way she smiles at me that gives me hope I’m not as far out of her league as I thought. It might just be time that this chaos gets a little geek.

Please be aware that this story is set in Australia and therefore uses Australian English spelling and syntax.