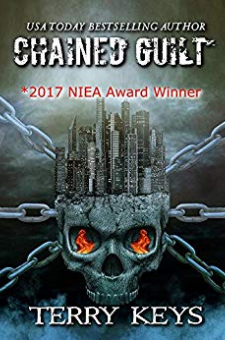 2017 NIEA Award Winning book! USA TODAY Best-Selling Author Terry Keys delivers in this action-packed, high-octane thrill ride! First time reader of Terry Keys. Good story, lots of twists. Suspense, drama, twists and turns a very good read. I have found a new mystery writer for my bookshelf.(Amazon Customer) A page-turning thriller in the tradition of David Baldacci, James Patterson, Jack Reacher and Harry Bosch, Chained Guilt pulls you in and never let’s go! Love is blind and lust is too...Detective David Porter had just closed the file on his latest serial killer case when horrific murders with the same MO start happening in and around Houston. A fifteen-year veteran of the Houston Police Department, Porter was one of the best serial killer detectives in the country, his talents known worldwide. The recently promoted officer couldn’t ask for much more. He was husband to one of the hottest women on the planet, former-model-turned-news-anchor Miranda Porter. He also had two beautiful daughters. Yes, life was good . . . or so it seemed. A cunning serial killer was on the prowl, brutally killing every child he could get his hands on. Porter was hot on his trail, but the killer was an expert – no mistakes. A late night of work, a storm and a car accident would lead David head first into another case – a kidnapping – and this time it was personal. Could there be a connection between the two? David was staring face-first down the barrel of both cases and time was running out.Does Detective Porter have what it takes to bring these criminals to justice and solve they mystery? Will the good life he once enjoyed elude him forever? Only time will tell.Detective David Porter is a former Army Ranger and a leading criminal profiler specializing in serial killers. He works for the Houston Police Department and lives just south of Houston with his wife Miranda and their two daughters. Get Chained Guilt today to experience this fast-paced thriller where the breathtaking action never ends!