Centaur of the Crime 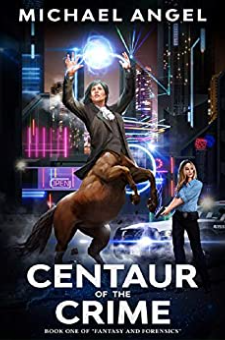 Kidnapped to a world of magic, can Dayna Chrissie use forensic science to solve a royal murder…before centaurs and humans plunge headlong to war?C.S. Lewis meets CSI when Dayna Chrissie, the LAPD’s best crime scene analyst, finds a golden medallion on a body that's been unceremoniously dumped at a construction site. At first, she doesn't think the find’s that unusual. Until that medallion’s enchantment transports her to the magical world of Andeluvia.Dayna's been summoned out of desperation: Someone’s murdered the king, and if she can’t solve the mystery, human and centaur realms plunge headlong into war! But nobody wants peace when war offers chances for riches and glory. So Dayna ends up with a team of cast-offs: a centaur wizard with father issues, a brash griffin warrior, and the world's unluckiest magical deer.And the trail leads where she least expects it...back home! When the evidence brings Dayna and her new friends back to Los Angeles, she must use all of her knowledge of forensics in order to solve the case.The price of failure? A war that will kill millions and devastate Andeluvia.Hope she works best under pressure.Reviews of the Fantasy & Forensics Series:Angel manages the nearly impossible...creating memorable characters in the midst of an intriguing mystery, action, humor and heart. -- JC Andrijeski, USA Today Bestselling Author of the Quentin Black Mystery seriesThis clever, humorous fantasy springs to life from page one... -- Publisher's WeeklyFast-paced action and sly wit make Angel's writing irresistible fun. -- Rebecca Moesta, NYT Bestselling co-author of Young Jedi KnightsQ - What makes the Fantasy & Forensics series special? A – I’ve enjoyed epic sword and sorcery types of fantasy since I was old enough to pick up a paperback. At the same time, I’ve always been a mystery fan – specifically, of those classic thriller or suspense novels that kept you up all night to finish them.So I wrote the F&F books as a unique mix of the two genres. Crime Scene Analyst Dayna Chrissie has to solve some nefarious wrongdoing in each book using forensic science – but in a world of sorcery and mythical creatures!Q – Why should readers give these books a try? A – Because you’ll get to meet a bunch of memorable characters – knights, centaurs, griffins, and magical fey deer – in the midst of intriguing mysteries filled with action, humor and heart. (Yes, I paraphrased one of my earliest reviewers, but I simply can’t put it any better than that.)Q – Tell us more about series protagonist Dayna Chrissie - what makes her tick?A – Dayna starts out as that person you always find at the office on a Saturday. She loves solving the mysteries that everyone else has failed to crack.Over the course of this book and its sequels, Dayna learns that ‘working’ is not the same thing as ‘living’. So she becomes attached to her group of friends, to the point that they become like family. This serves her well as she encounters wizards, dragons, phoenix, demons, wyverns, and unicorns in her later journeys!Q – Do readers have to read each book in the series in a specific order?A – Not necessarily! Each novel is self-contained and doesn’t end on a cliffhanger, so you could pick up a book from anywhere in the series and enjoy it.On the other hand, it’s fun watching Dayna’s friendships and companions grow closer to her over time. There’s also a couple over-arching themes and plots that unfold in the later books. So reading in order might bring its own rewards too.