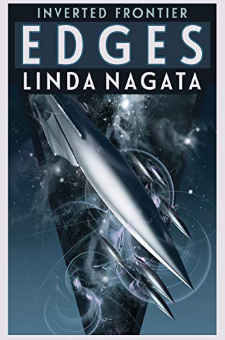 From the Edge of Apocalypse: Deception Well is a world on the edge, home to an isolated remnant surviving at the farthest reach of human expansion. All across the frontier, other worlds have succumbed to the relentless attacks of robotic alien warships, while hundreds of light years away, the core of human civilization—those star systems closest to Earth, known as the Hallowed Vasties—have all fallen to ruins. Powerful telescopes can see only dust and debris where once there were orbital mega-structures so huge they eclipsed the light of their parent stars. No one knows for sure what caused the Hallowed Vasties to fail, but a hardened adventurer named Urban intends to find out. He has the resources to do it. He commands a captive alien starship fully capable of facing the dangers that lie beyond Deception Well. With a ship’s company of explorers and scientists, Urban is embarking on a voyage of re-discovery. They will be the first in centuries to confront the hazards of an inverted frontier as they venture back along the path of human migration. Their goal: to unravel the mystery of the Hallowed Vasties and to discover what monstrous life might have grown up among the ruins. Edges is a new entry point into the classic story world of Linda Nagata’s The Nanotech Succession. From Karl Schroeder, New York Times Notable author of Ventus, and of Stealing Worlds: "In the Nanotech Succession, Linda Nagata crafted one of the great sagas of galactic-scale science fiction. Yet for every revelation and discovery we found another mystery—none so great as what destroyed the supposedly omnipotent, star-spanning civilization of the Hallowed Vasties. At last, in Edges, Nagata teases at an answer, while simultaneously upping the stakes. Edges is a taut story that asks how far you might push yourself, and how much of your own humanity you might have to sacrifice to save those you love. Edges bursts with ideas and proves once again that Nagata is one of SF's great worldbuilders." "Edges runs on a lot of brain power, and it's an intellectually stimulating read that posits some truly intriguing questions and ethical dilemmas [...] While the bulk of Edges is interested in more heady affairs and the nature of mankind's place in the cosmos, Nagata's proficiency in writing action beats is certainly on strong and regular display [...] as this book ramps up to its dizzying, frenetic climax...." —High Fever Books 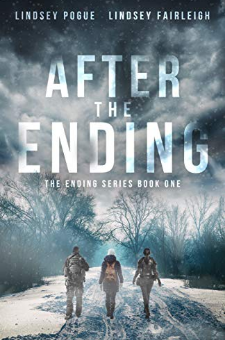 They may have survived the apocalypse, but the Virus changed them...

Grad student Dani O'Connor won't let a cross-country move end her closest friendship. But when a mysterious virus consumes the world and Dani, herself, falls violently ill, she fears she'll never see her loved ones again. After her fever finally breaks, she barely recognizes the devastated world around her. Everyone is dead. Dani is all alone. Or so she thinks...

As a bartender, Zoe is used to dealing with hotheads and dirtbags, but nothing could have prepared her for the twisted thoughts of her fellow survivors. Her family is gone, and anyone left alive in the world is either sick, crazy, or changed...like her. As her newfound super senses gain strength, Zoe must learn to control them before she loses herself to madness completely.

Perilous terrain spans the distance between them, and deranged survivors lurk in dark corners everywhere. Can Dani and Zoe overcome deadly attacks and unseen dangers in order to find each other? Or will they lose their way--and their lives--along the journey?

After The Ending is the first book in the evocative, superpowered post-apocalyptic adventure, The Ending Series. If you like unbreakable friendships, gritty dystopian settings, and a touch of romance, then you'll love Lindsey Pogue and Lindsey Fairleigh's heart-wrenching tale. 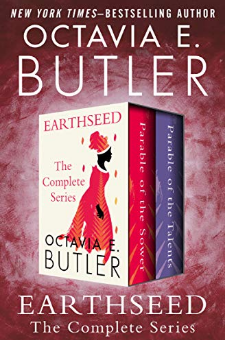 A multiple Hugo and Nebula Award winner’s powerful saga of survival and destiny in a near-future dystopian America.

One of the world’s most respected authors of science fiction imagines an apocalyptic near-future Earth where a remarkable young woman discovers that her destiny calls her to try and change the world around her. Octavia E. Butler’s brilliant two-volume Earthseed saga offers a startling vision of an all-too-possible tomorrow, in which walls offer no protection from a civilization gone mad.

Parable of the Sower: In the aftermath of worldwide ecological and economic apocalypse, minister’s daughter Lauren Oya Olamina escapes the slaughter that claims the lives of her family and nearly every other member of their gated California community. Heading north with two young companions through an American wasteland, the courageous young woman faces dangers at every turn while spreading the word of a remarkable new religion that embraces survival and change.

Parable of the Talents: Called to the new, hard truth of Earthseed, the small community of the dispossessed that now surrounds Lauren Olamina looks to her—their leader—for guidance. But when the evil that has grown out of the ashes of human society destroys all she has built, the prophet is forced to choose between preserving her faith or her family.

The Earthseed novels cement Butler’s reputation as “one of the finest voices in fiction—period” (TheWashington Post Book World). Stunningly prescient and breathtakingly relevant to our times, this dark vision of a future America is a masterwork of powerful speculation that ushers us into a broken, dangerously divided world of bigotry, social inequality, mob violence, and ultimately hope. 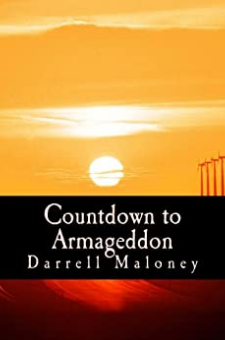 Scott Harter was an average man. He wasn't dumb, but he'd never be invited to join Mensa either. He'd liked to have married a beauty queen, but his average looks certainly did nothing to attract any. Neither did his vanilla personality.
No, Scott was average in every way, except when it came to luck. He was a very lucky man. And that's how he managed to discover what the Mayans really meant about the world ending on December 21st, 2012.
Scott learned that the Mayans never said the world was going to end that day. What they said was that day marked the beginning of a period that would see the end of civilization as we know it. The Mayans called it "The last period of progress."
Scott knew that big changes were coming. The Mayans left several clues about the pending disaster. He just didn't know when. He didn't know if he had two days to prepare, or two years.
To protect his family, Scott threw every resource he had into preparing for the end. And some resources he didn't have.
This is Scott's story. 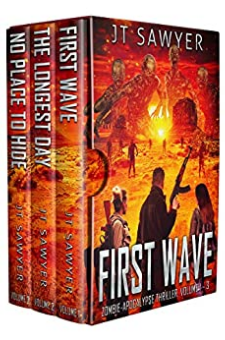 The bestselling, First Wave Post-Apocalyptic Zombie Survival Series is now available as a boxed set with all three action-packed volumes.

Volume 1, First Wave
Special Forces veteran Travis Combs just wanted to forget his weary years of leading combat missions while taking an extended rafting trip through the Grand Canyon. As he and his group complete a 22-day trip on the Colorado River, they find the world has unraveled from a deadly pandemic. Now, he has to show his small band how to live off the land and cross the rugged Arizona desert, while evading blood-drinking zombies, gangs of cartel bikers, and a rogue government agency.

Volume 2, The Longest Day
After training and leading his small band of survivors through the desert, Travis Combs just wants to get back home to his son in Denver. However, an emerging force in the mountains of Flagstaff poses a threat to his plans, and they will stop at nothing to obtain what he has.

Volume 3, No Place To Hide
As Travis and his band of fighters head for the secret lab in Durango, they face the convergence of powerful forces bent on securing the vaccine. With a traitor in their midst, and with the emerging threat of faster moving zombies, he must lead his weary group through the mountains and take the battle to his enemy.

To Walk in the Way of Lions 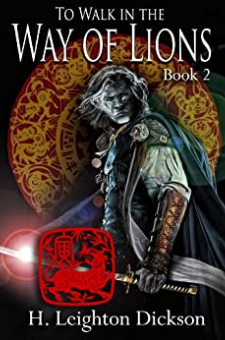 "ONE OF THE BEST I'VE READ IN SOME TIME!"

TO WALK IN THE WAY OF LIONS is the second in the powerful Original Series by H. Leighton Dickson and picks up where TO JOURNEY IN THE YEAR OF THE TIGER leaves off. This is a sweeping post-apocalyptic tale of genetically altered lions and tigers, wolves and dragons in a world that has evolved in the wake of the fall of human civilization. Half feline, half human, their culture blends those of Dynastic China, Ancient India and Feudal Japan where humans are legend and kingdoms have risen in their stead. Fans of Tolkien, GAME OF THRONES, REDWALL or Japanese anime will be entertained in these intelligent and beautifully written pages in a blend of science, fantasy and zoological speculation.

“World-building on par with Zelazny!”

The conclusion to the sweeping epic that began in 'TO JOURNEY IN THE YEAR OF THE TIGER, the story picks up where Journey leaves off, in the harsh deserts of Khanisthan. The team is running under a very set of different dynamics than before, for not only will they be forced to confront enemies tracking from the North and a hostile force from the Palace following from the South, but they must face their own demons that are plaguing them from within. It's man against man, cat against cat, Seer against Alchemist, knowledge versus ‘the Way of Things’ – a Sci-Fi 'Pride and Prejudice and Lions', like you’ve never read it before.

From the ruthless wilds of Khanisthan to the wind-swept shores of the Mediterranean Sea, the beauty and savagery of the Upper Kingdom unfolds like a living thing before them as they travel and Kirin will find out what it means to follow the code of Bushido to the gates of death and beyond…

This is the journey of six individuals as they travel beyond the edges of the known Empire, into lands uncharted and wild. Theirs is a journey of magic and mystery, science and swords, romance and intrigue. It is a journey of different perspectives and unexpected kharma and love found in surprising places. It is a journey that takes place five thousand years or so in the future, naturally in the Year of the Tiger.