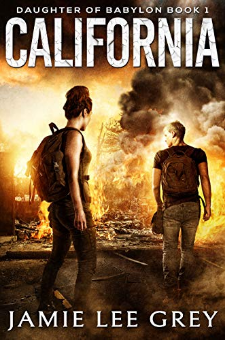 Flames will destroy. Planes will fall from the sky. Bombs will detonate. And that’s just the first day.
For years, a terrorist organization has plotted to destroy the United States. One of their leaders is enmeshed in the highest levels of California’s state government. Today, they’re planning to burn it all down.

Katie and Zach Nelson were looking forward to celebrating their anniversary with a relaxing camping trip on the California coast. But when they’re caught in a massive wildfire, all their future plans go up in smoke.

Meanwhile, Basilia Hernandez and Alana Mills, the new president and vice president of the United States, face one shocking turn of events after another. Do they have what it takes to protect and defend the country during the apocalypse? Or will they actually make it worse?

CALIFORNIA is the first book in the faith-based, thrilling post-apocalyptic Daughter of Babylon series. Begin the adventure today!