Caesar: Life of a Colossus 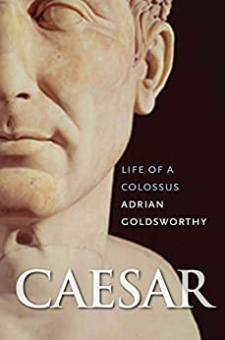 This “captivating biography” of the great Roman general “puts Caesar’s war exploits on full display, along with his literary genius” and more (The New York Times)   Tracing the extraordinary trajectory of the Julius Caesar’s life, Adrian Goldsworthy not only chronicles his accomplishments as charismatic orator, conquering general, and powerful dictator but also lesser-known chapters during which he was high priest of an exotic cult and captive of pirates, and rebel condemned by his own country. Goldsworthy also reveals much about Caesar’s intimate life, as husband and father, and as seducer not only of Cleopatra but also of the wives of his two main political rivals.   This landmark biography examines Caesar in all of these roles and places its subject firmly within the context of Roman society in the first century B.C. Goldsworthy realizes the full complexity of Caesar’s character and shows why his political and military leadership continues to resonate thousands of years later.