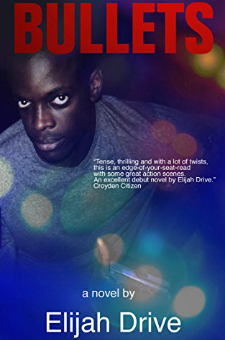 "An exceptional mystery, Eli Drive's BULLETS draws you in close to its heart and reminds us that the terrible things done in the name of dollars is nearly always tragic for working people, that there's always a price in blood or in karma and, in the end, we make our own justice," Ato Essandoh - HBO's VINYL, CBS' ELEMENTARY, DJANGO UNCHAINED, BLOOD DIAMOND, BBC America's COPPER. Professional poker player Jon "Big Slick" Elder was minding his own business in a diner when an Arizona sheriff walked in and killed the man sitting next to him, a Mexican day laborer accused of murder. The law officer then arrested Slick simply because the sheriff didn't like the color of Slick's skin.Slick knew that the stranger who had been sitting next to him at the diner was no murderer because, in addition to cards, Slick also kills people for money. The poor man didn't have the look, but Slick does, and with the help of a Latina assistant district attorney, a Navajo state trooper and a homegrown federal agent, Slick sets out to prove the dead man's innocence. What he discovers, as he digs deeper, is a deadly mystery that threatens not only him, but his newfound friends as well. But Slick hates to have anyone… ANYONE… toss him his shoes and tell him to get out of town."This is an exciting, intriguing, and thrilling book with twists and turns that are unexpected but all too believable. Dear author: please write another one like this." - Book Angel"Tense, thrilling and with a lot of twists, this is an edge-of-your-seat-read with some great action scenes. An excellent debut novel by Elijah Drive." Croydon CitizenBULLETS - mystery thriller by Elijah Drive