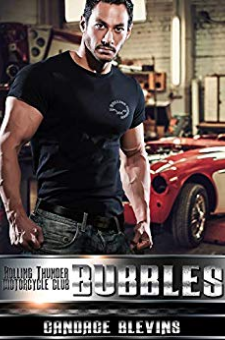 Lexi is late for her cosmetology class. She races another car for the only parking space close to her building — and wins. She ignores the other driver’s string of not-terribly-creative cursing and threats, and scurries to class. However, when she comes out hours later, she freezes when she sees members of the local gang sitting on the hood of her car, waiting.Terrified, Lexi rushes back inside to call her sister, who works for the local MC. Ten long minutes later, her sister tells her to go to the athletic center and wait for some guys on bikes, who’ll take her to her car and keep her safe. Bubbles can’t believe how tiny the girl with the pastel blue, pink, and purple hair is, and wants to lash out at anyone who scared her. He and Slick get her into her car and away from school, and Bubbles follows her home to be sure she’s safe. When he realizes she lives in the heart of the gang’s territory, his protective instincts kick in and he takes her home with him.Lexi’s nineteen and has been with two men her entire life. Bubbles is in his thirties and has had every sexual experience known to man. He’s a felon who’s spent serious time in prison and is still on parole. He’s the last kind of complication she needs in her life, but for such a gruff, giant of a man, he’s gentle with her. He makes her feel safe.Little did Lexi know how drastically her life would change because she hit the snooze button one more time.