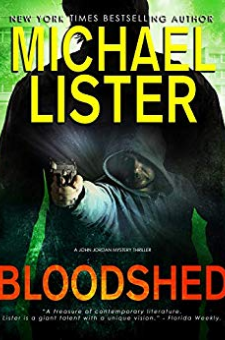 What if a school shooter wears a mask and later discards it in order to disappear into the chaotic crowd of exiting students?  An active shooter leads John Jordan on a riveting chase into a stunning mystery.While attempting to prevent a school shooting, sheriff’s investigator John Jordan must confront a cold, cruel killer the likes of which he's never seen before.When the echoes of the gunfire cease and the smoke clears the biggest mystery of all still waits to be solved. Who planned and perpetrated this devastating deed and how did he hide his identity?But a cunning killer isn’t the only thing John is battling. Old demons have resurfaced to threaten everything he’s worked so hard for. Can John expose the killer or will he die trying? Read this thrilling stand-alone mystery today and find out!"Michael Lister is a master storyteller." Michael Connelly *Available as an exciting audiobook. "The tension ratchets up early in Lister’s superb 19th John Jordan mystery Bloodshed. Lister adroitly combines suspense and fair play in one of the series’ best entries." Publisher's Weekly starred review "Every word rings true in this disturbing demonstration of how hard it is to stop a massacre even when you know it’s coming. The aftermath is heartbreaking and the ending a real shocker." Kirkus Reviews