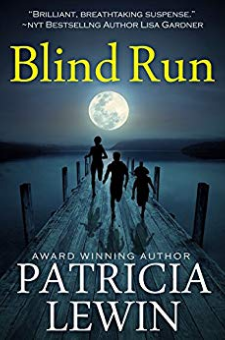 Decker was a specialized hunter for a CIA Shadow Organization, working deep undercover to track down and capture ruthless international mercenaries and fugitives. Then a daring mission takes a lethal turn, leaving innocents dead in its wake, and Ethan’s wife a prime target of a ruthless assassin. To save her, and because he can no longer justify his actions, Ethan exiles himself to a remote desert in New Mexico, a prisoner of his own guilt and grief.Then one searing day, a former member of Decker’s covert team arrives at his door, shepherding two children. She entrusts them to his protection and leaves without explanation.Suddenly, the race is on to reach his ex-wife before the deadly assassin finds her, and to unlock the mystery behind the two children—who have become pawns in a dark conspiracy so evil that even this former spy cannot imagine the peril that lies directly in his path.This is the first full-length book in the BLIND RUN series.Also from Patricia Lewin, the Erin Baker Thriller Series.OUT OF REACHOUT OF TIMEOUT OF THE WOODS (Coming Soon)Short Stories by Patricia LewinHELEN TOLD MEAWAY (A Blind Run Short Story)HIDE (A Blind Run Short Story) - Coming Soon