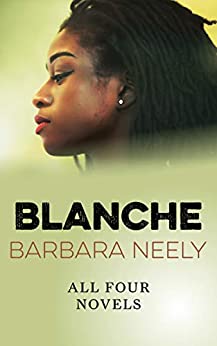 All four ground-breaking Blanche White novels by Mystery Writers of America grandmaster Barbara Neely, Winner of the Agatha and Macavity Awards.... in one volume.

“One is tempted to describe Blanche White as a combination of Agatha Christie’s Miss Marple and Walter Mosley’s Easy Rawlins…but it would be a crime to suggest she is anything less than a truly original creation,” Los Angeles Times

BLANCHE ON THE LAM
Blanche White is a plump, feisty, middle-aged African-American housekeeper working for the genteel rich in North Carolina. But when an employer stiffs her, and her checks bounce, she goes on the lam, hiding out as a maid for a wealthy family at their summer home. That plan goes awry when there’s a murder and Blanche becomes the prime suspect. So she’s forced to use her savvy, her sharp wit, and her old-girl network of domestic workers to discover the truth.

“Blanche not only solves the crime, but exhibits familiar foibles and strengths, believes in kitchen-table wisdom, and possesses a wicked sense of humor,” Ms. Magazine

BLANCHE AMONG THE TALENTED TENTH
When Blanche White moved north to Boston, she believed it would be a better place to raise her kids, especially after she got them into an elite private school. But now her children are becoming elitist and judgmental, acquiring more attitude than education. So when she and her kids are invited to Amber Cove, an exclusive resort in Maine for wealthy blacks, Blanche jumps at the chance to see how the other half lives and maybe stop her kids turning into people she doesn’t want to know. When one of the guests kills himself, and another is electrocuted in her bathtub, Blanche becomes an accidental detective once again.

“The uproarious Blanche White, the southern housekeeper who knows her own mind, opened doors to the nuances of black life for readers and writers alike. Barbara Neely is a trailblazer,” Naomi Hirahara

BLANCHE CLEANS UP
Blanche White is working as a temporary cook and housekeeper for a right-wing, Massachusetts gubernatorial candidate Alistair Brindle when someone tries to blackmail him. It’s an ugly mess that Brindle’s political team is eager to sweep under the carpet and that Blanche can’t resist cleaning up herself…especially after a young black man is killed who knew too much about Brindle’s dirty laundry. Her investigation raises dark secrets involving sex, environmental contamination, and political corruption, difficult stains on the white, conservative Brindle family that someone is trying to remove with murder.

“It’s a case that plays beautifully to the strengths Blanche showed in her first two novels: poking around, getting underfoot, and displaying maximum attitude as she solves the tiny mystery en route to sticking it to the Man. The title says it all,” Kirkus Reviews

BLANCHE PASSES GO
Blanche White returns to Farleigh, North Carolina for the summer to help her best friend with her catering business. It’s a homecoming rich with the potential for new romance and fraught with the pain of facing the man who raped her at knife-point years ago but was never prosecuted for the crime. Shortly after Blanche arrives, a young woman is murdered and the clues point to the rapist. Blanche investigates, determined not to let him get away with another crime… nor is she willing to let his money-hungry sister marry a sweet, mentally-challenged man for his wealth. With her usual persistence, feisty wit, and indomitable spirit, her quest for the truth reveals the racism and sexism that still permeate the new south.

"Blanche's voice is sassy and sexy, and her take on urban life through African American eyes is blade-sharp and sometimes as cutting," Booklist