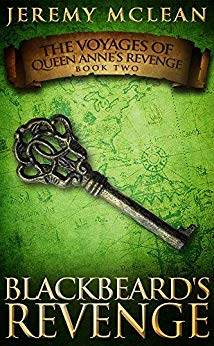 Praise for Book 1:"Kept me turning page after page to see what was going to happen." - Teressa J Betts"...Like a scene from a Indiana Jones movie." - Alycia TillmanRevenge is a powerful motivator.It turns the pious into sinners, the most timid to anger, and the most virtuous amongst us into cold blooded murderers. If used correctly, the desire for vengeance can also be used as a tool.Edward Thatch, the rookie pirate known as Blackbeard, is out for Revenge. Revenge against those who wrong his crewmates and himself.Before Edward can take his retribution he'll need to finish unlocking his ship, Freedom, by playing Benjamin Hornigold's game. Edward still has three tests to complete in order to gain the last keys to his ship, and he will have to risk life and limb of himself and his crew to pass the trials.How far will Edward's desire for Revenge take him, and what dangers will he place his crew into for his Freedom?Find out what action Edward will take in Blackbeard's Revenge, and follow his fantasy adventure full of pirates, privateers, and everything in between in The Voyages of Queen Anne's Revenge!